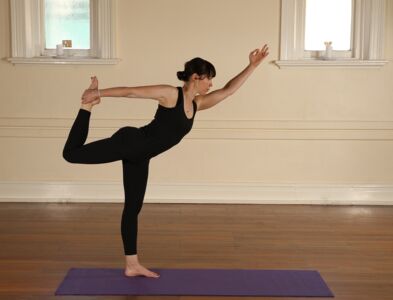 In the traditions of yoga, it is said to have been revealed for our benefit by Lord Siva. Now the deities manifest in different forms with different names. Two of the names of Siva refer to his divine cosmic dance: Nataraja and Tandava.

It is interesting that the pose called Natarajasana does not resemble the famous image of Nataraja. The lesser known pose of Tandavasana takes that form (although there are some internet sites that depict Tandavasana as something else entirely!)

Natarajasana is a complex pose that has a number of requirements to do it successfully.

Mercifully there are variations that you can work with that are less demanding.

Warm up for the pose by doing postures that release the psoas and quads, and open the chest and shoulders, and include gentle back-bends to warm up the back.

Firstly work on finding balance standing on one leg. You can do this also through other balancing poses such as Tree pose, vrksasana. You can also practice balance and lengthening the quadriceps by standing on one leg and simply drawing your foot up and towards your buttocks using your hands. This would be your variation 1. If you cannot reach your toes with your hands, capture your foot in a strap and draw the ends of the strap forwards to draw the foot towards the buttocks. Use of the strap can be helpful in mastering all phases of the posture.

The supporting leg is straight in this pose.

If ready, keep only one hand on the foot, perhaps bringing the other to lay it over the heart. You can now begin to reach the foot back into the hand. At this stage this may mean leaning forward and drawing the foot up. The free hand might reach out in front, perhaps taking a mudra such as chin mudra.

Increase the back bend element by practicing bringing the torso more upright in the pose while keeping the foot as high as possible..

If you are a very stretchy bendy person you may then find your way to bring both arms overhead to grasp the foot from above, drawing it high, torso is upright, front fully open and the back taking a deep backbend.

This pose adopts the famous form of Nataraja, though we have only two hands and he has four.

Again it is a standing balance, but not as complex as Natarajasana. It aims for grace with the suggestion of energetic action around a core of stillness.

In this pose the supporting leg is bent a little, and standing balances with a bent leg can be easier than straight leg ones (Garudasana - eagle pose, is another).

So lets say you are standing on the right leg, with the knee bent, bring the left leg up in front this time and over to the right side.

Now raise your right hand, fingers pointed up, palm forward and with a bent elbow position it above the raised foot.

The five raised limbs represent the five acts of the divine:

In very early depictions of this icon the figure that Siva is standing upon with his right supporting leg has a blissful look on its face and this was one of his servants, or ganas, who is in bliss to be allowed to be the footstool of the Lord. In later versions this figure becomes more grotesque and has taken on a new symbolism, of being the state of Maya. Maya in some schools (e.g. Advaita Vedanta) means Illusion and is generally seen negatively, and this change to the iconography is to bring in the idea of the divine dance of Siva trampling on Illusion for our enlightenment. In Tantrik Saivism however, from where the figure of Nataraja derives, Maya is simply the veil of concealment, already represented in the left arm.

Other poses named for Lord Siva in a different form are the Virabadhrasana poses. 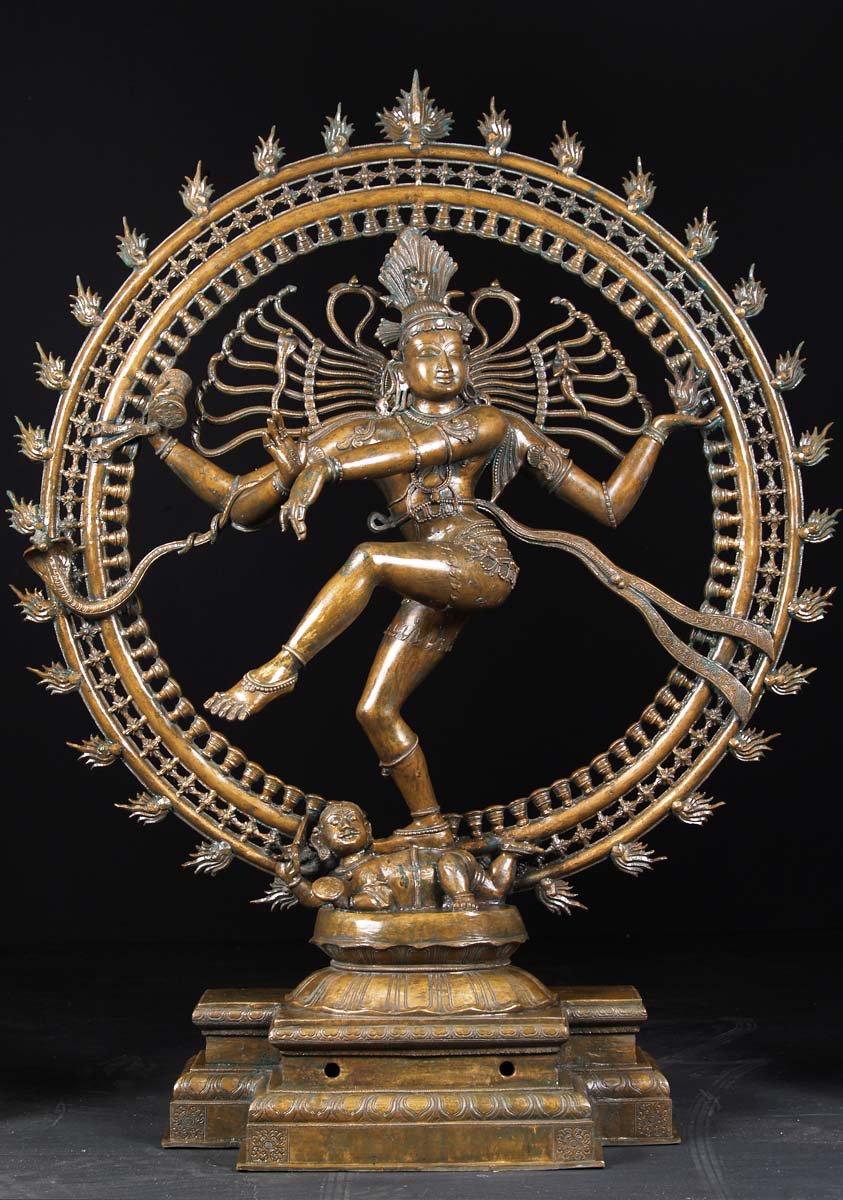