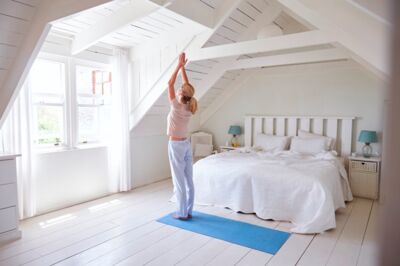 For your personal yoga practice

Sūrya namaksāra is the Sanskrit for Sun Salute. The sun salute may have its origins in ancient practices of prostration before deities, and the sun was considered divine. However, it certainly has changed and developed since the twentieth century. The simplest form may go back to the middle ages, and there were chants that accompanied it. These days you can vary it in many ways with the addition of different postures.

The sun salute is the original vinyasa sequence. In modern postural yoga the word vinyasa has come to mean connecting poses into a sequential flow, and whole styles of yoga have grown up around this. Also some schools of modern postural yoga have developed set forms of the sun salute that form part of their progression and sequence, and in some cases a misconception has arisen that this is the "right" way to do sun salutes. In fact, this is all part of a broader yoga practice that is quite modern, twentieth century at earliest, and really anything goes.

If we take a version that could be done to the chants, then we need to have a 12 point sequence and the most likely is described here, however you can, and indeed should, modify to suit what you and your body need. Attend classes and you will learn how to do sun salutes and different variations as they are a staple of modern postural yoga classes.

1. Tāḍāsana with hands in prayer position at the heart - sometimes called Samasthithi - even standing

Aṣtaňgāsana has eight points touching the floor, toes of two feet, two knees, two hands, chest and chin. To get there you can inhale to plank and exhale to lower down.

Alternatively do caturaňga dandāsana, four limbed staff pose. (Pronounce the c as a ch not a k sound) Inhale to plank then bend the elbows to lower torso in line with upper arms.

Upward facing dog has the tops of the feet on the floor and the two hands, everything else is held in a smooth upward sweeping curve, spine in extension. If that is too strong allow the knees to come down.

Alternatively, you could come into sphynx pose, forearms on the floor with the elbows under the shoulders.

Or into bhujaňgāsana, cobra pose, where the pubic bone is on the floor. Classically hands would be under the shoulders and the arms straightened, but try the hands in different positions, wider and further forwards, and only straighten the arms as far as is comfortable.

9. Inhale to bring the same foot that you took back, forwards to lunge.

12. Exhale to Tāḍāsana, hands in prayer to the heart.

Next time you go take the other foot back. This will even you up on both sides.

Traditional one full round is when you have finished it two times leading with one foot and then the other.

There is some debate as to whether it is "correct" to lead with the left foot or the right foot first time , but seriously, nobody knows. Each proponent ardently thinks he or she is correct.

LET THE BREATH MOVE YOU