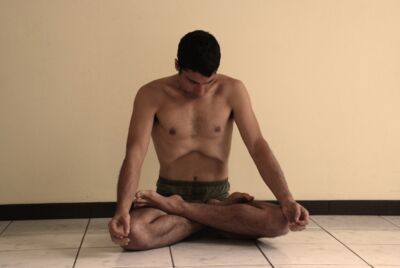 The word baṇdha is a Sanskrit word with meanings of bind, lock, fetter, capture, arrest. In haṭha yoga, baṇdha is a sub-set of mudrā, and refers to the three "locks" applied along the central channel in the process of awakening kuṇḍalinī.

The English word that commonly is used to translate the word baṇdha is "lock". While we can speculate that these practices had precedent in the ascetics of the Śramaṇa movement, the earliest textual reference is from a tenth century text that arises from tantra but is actually an early haṭha text. (Earliest references 10th C. Goraksha Śataka, 11th C.  Amṛtasiddhi following chronology of James Mallinson.)

Traditional haṭha yoga was very concerned with raising kuṇḍalinī, a coiled serpentine energy lying dormant at or near the base of the spine, up the central nādī. The locks are applied both to prevent backsliding and to force it on and up. (Remember, haṭha means "force".)

The mūla baṇdha is the one most commonly encountered in a modern postural yoga class and is a contraction and upward lift of the pelvic floor.

Jālandhara baṇdha is the throat lock, where the chin is taken down to the notch at the base of the throat.

Mahā baṇdha is a combination of all three.

Mūla baṇdha is the most benign of these practices and is similar to the pelvic floor exercises prescribed by physiotherapists. It will tone the muscles of the pelvic floor that hold the bladder, bowel and uterus in position. Both men and women will benefit from strengthening these muscles, which when weak can lead to prolapses, and loss of bladder and bowel control. However overuse can also lead to a rigidity in the pelvic floor which will inhibit proper breathing and create another whole set of problems.

Uḍḍīyana baṇdha  is often taught in a manner that puts undue pressure on the heart and is certainly contraindicated in heart conditions, however it may also create heart disfunction if practised in that way.

Furthermore, breath restraint is required in these practises and that must be learnt and practiced prior, or great anxiety and panic may result.