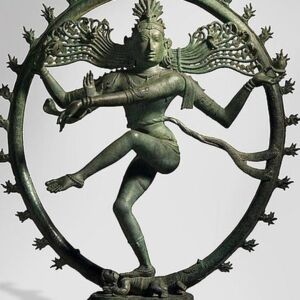 The word mudrā can mean attitude, gesture, seal and mark. In Indic religions it can refer to symbolic or ritual gestures and poses.

Mudrā also have an important place in Indian dance and in yoga. Some mudras are performed with the whole body, others are just with the hands and fingers, yet others, less known, more esoteric, are attitudes held with the mind.

Note that the pronunciation has a long "a" at the end. Sanskrit "u" is a short u/oo as in put, or foot. Sanskrit "a" is  like the Australian pronunciation of "u" in but. When there is a line over the vowel, it is twice the length ...  "mudraa".

The picture of the dancing Śiva Naṭarāja is chosen for this post as there are a number of mudrās on display. At one level the whole posture could be regarded as a mudrā, and it is full of symbolism and meaning. The two front hands display common mudrās. The front right hand is held in the gesture of dispelling fear, fingers upward, palm facing out, Abhaya mudrā, commonly seen in iconography of Buddha. The front left hand, held with the fingers downward, is in the gesture of the staff, daṇḍahasta mudrā, where the arm crossing the body indicates the power of concealment, but the fingers point to the raised foot, which symbolises grace, revelation and remembering. The back right hand is holding a little hourglass shaped drum, the ḍamaru, difficult to discern in this picture, but even the way the hand holds the drum is recognised as mudrā.

Mudrā is important in Indian dance forms, where the dance is a form of choreographed mime, telling sacred stories. The hand gestures carry meaning and give important clues as to where the story is going. 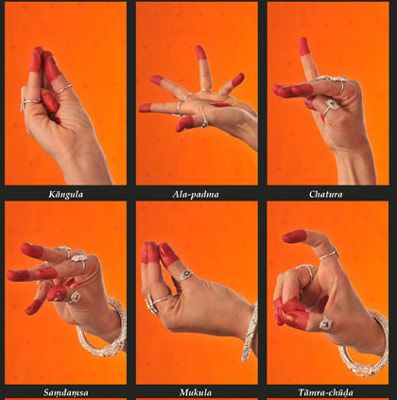 The images to the left are a few such story telling gestures. Dancers work hard in their training to perfect these mudrā so that they can make them easily and clearly as the dance demands. Below is the mudrā depicting Śiva in "linga" form. 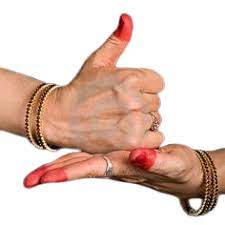 In yoga, mudrā can be a symbolic gesture, but it is also an important manipulator of pranic energy in the body.  I am sure that everyone in a yoga class has at some time done Añjali Mudrā where the hands are brought together in a prayer-like gesture. You are also bound to have done the Alternate Nostril Breath, and been taught a special hand gesture, a mudrā  for that. So you are already using mudrā  in your yoga. Mudrā  is not confined to the hands, though the majority of mudrā  in yoga are hand, or hasta mudrā.

Mudrā affects your emotional and mental attitude by affecting the flow of energy. It is a wonderful additonal practice to introduce into your yoga life.

The following are some of the more commonly encountered mudrā.

Practised with the hands