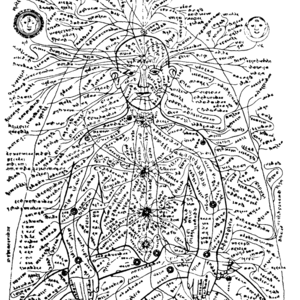 The Sanskrit word nāḍī can mean tube, channel, pipe, blood vessel. In yogic physiology it refers to channels or conduits of pranic energy in the energy body.

Indian texts referred to  nāḍī  in ancient times. The Chāndogyopaniṣad  which dates to as early as 800BCE uses the term and ennumerates the number of such channels as one hundred and one:

One hundred and one, the veins of the heart.
One of them runs up to the crown of the head.
Going up by it, he reaches the immortal.
the rest, in their ascent, spread out in all directions.

Not that all texts agree on the number.  The 101 is echoed in the Praśnopaniṣad (c. 400BCE) and is the passage from the Chāndogyopaniṣad quoted above is an exact repetition from the Kaṭhopaniṣad (c. 600BCE). The yoga texts of the 1300 - 1700CE claim many more, (Śivasaṃhitā (14th century) has 350,000, Haṭhayogapradīpikā (15th century) has 72,000 each of which branches into another 72,000). The yoga texts agree however on the importance of three, idā, pingala and suṣumṇā.

Tantra literature which is much older than the literature of Haṭha Yoga, does not name these channels but they are an important feature. Central channel practices feature in the Vijñāna-bhairava-tantra (c. 850CE).

The Idā is the left hand channel, along which prana flows in and down along with the inhale breath. The Pingala is the right hand channel, and along it the prana flows up and out, along with the exhale breath. Idā is feminine and associated with lunar energy, pingala is masculine and associated with solar energy. The yogi seeks to fuse this flow of energy in the central channel, the suṣumṇā, and various practices are given to achieve that end.

In the haṭha yoga literature and practice of the middle ages onwards techniques are given for the purification of the nāḍīs. The idea is that to achieve liberation, blockages in the nāḍīs must be cleared. Besides a spiritual benefit such practices also strengthen and purify the physical body and so benefit health and wellbeing.

Bandhas, mudras, postures, cleansing practices (shatkarma) and prānayāma techniques are among the means by which nadis are purified.