There are many types of yoga on offer in Adelaide. Of course you will want to chose what is best for you. Many yoga studios offer vigorous and challenging yoga, and there are many hot studios around. If you are looking for a home for your yoga journey that is suited to everybody, practised at a comfortable temperature and with plenty available for a less than athletic body, Yoga Spirit Studios has many possiblities for you.

At first it can be confusing, as you look around for yoga. Don't worry, we have you covered. This article demystifies some terms of yoga style and then tells you about what we offer at Yoga Spirit Studios and how it fits in.

Hatha yoga - what is it?

The word hatha yoga has changed it's meaning over the 500 years or so since it emerged.

Originally it meant "the forceful yoga" and it was truly yoga for the real badasses! If this was your path you were almost certainly a man, a dropout and a hermit, and you would practice seriously difficult things, including excruciating postures that you would hold for a very long time, as well as cleansing practices and self-mortification. It certainly included posture, cleansing practices, breathing practices called pranayama, and meditation.

These days it is often applied to the more gentle styles of postural yoga. Generally speaking though, all modern postural yoga had its origins in hatha yoga. 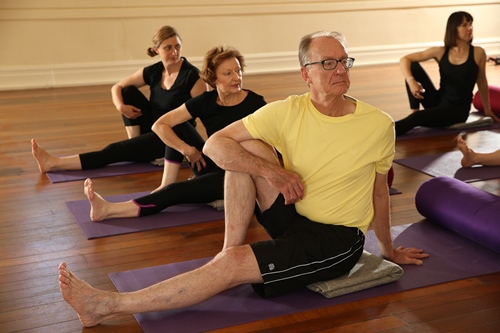 The modern yoga world has come to almost exclusively identify with forms of physical exercise that is often a long way from the yoga of old where spiritual liberation was the whole purpose of practice. In modern postural yoga many of the types you meet are named by or after a celebrity yoga teacher who claimed some aspect of yoga practice under a trade name.

Within modern postural yoga you will meet some of the following terms:

This is a Sanskrit word meaning to join together. It refers to a practice of joining together different postures so it becomes a flowing form. It is very popular as it can be quite aerobic in character and yet can also have inserted within it some very challenging and fancy yoga postures. Vinyasa practice is generally harder than "non-vinyasa" simply because there is little time to make extra space to instruct good alignment, and safety, or to develop basic techniques.

An ancient form of Vinyasa, was the sun salute, or Surya Namaskara, originally a cycle of just 12 positions, in which some postures are repeated.

Yin Yoga is a brand name, of a yoga style in which postures are taken and held for longer periods of time.  The main focus in Yin Yoga is stretching and targeting fascia and connective tissue. It takes its keys from Chinese approaches to medicine and wellbeing, seeing vigorous and strong yoga styles as "yang" and seeing a need for something slower and deeper to complement it.

This word, meaning "eight limbs" is used in the text of classical yoga (which was not a postural yoga at all), the Yoga Sutras of Sage Patanjali (compiled sometime between 500 BCE and 400 CE) In fact Classical yoga is also called Ashtanga Yoga, and properly so given its origin, but in modern postural yoga it refers to the style founded by K. Pattabhi Jois (26 July 1915 – 18 May 2009), himself a student of a key figure in the origins of modern postural yoga, Tirumalai Krishnamacharya (18 November 1888 – 28 February 1989). Jois's Ashtanga Yoga prescribes set forms, variations upon the basic sun salute, and progressive levels of difficulty.  It is a Vinyasa style, perhaps the original vinyasa style.

This is a style named after a person, and it is strictly governed to maintain its integrity to its source. B K S Iyengar (14 December 1918 – 20 August 2014) was also a student of Krishnamacharya and went on to found his own style. Iyengar yoga places high emphasis on alignment, with strict rules about what that is, vis a vis foot placement, and so on. Iyengar yoga also pioneered the use of props as enablers of alignment. Iyengar Yoga poses are executed with great attnetion to detail and precision, which are practiced in a static manner.

Bikram Yoga and other hot styles

Bikram Choudhury (born 1944) devised a form of postural yoga, comprising a set sequence of 26 postures to be practised in a hot room at 40 °C with a high humidity. He attained celebrity status and Bikram Yoga became a popular trend across the western world. Various other hot styles have also followed. Bikram teachers are taught a fixed dialogue and typically urge and admonish the class to go deeper and deeper. Offshoot styles of hot yoga have allowed more flexibility in teaching style and sequencing. Find out what we think of hot yoga claims.

Shadow Yoga is a postural yoga form devised by Shandor Remete. Remete originally started teaching yoga in Adelaide before moving to Sydney and strong ties to Adelaide still remain. Shadow Yoga postural work does not follow the same postures that are found in other forms, Remete having worked from ancient tantric texts. Shadow Yoga works with the subtle body, and follows a set form. Yoga mats are not used in Shadow Yoga. Remete has also gone on to develop other styles. There are influences from classical indian dance and martial arts in these styles. The form is fluid and feminine, and geared towards shifting energy.

In the world of modern postural yoga, Kundalini Yoga usually refers to a style of yoga founded by Yogi Bhajan (August 26, 1929 – October 6, 2004), though the term is certainly used in texts to refer to practices that have nothing to do with this popular form. Kundalini Yoga introduces Sikh mantras, and Sikh dress codes into  the practice, even though yoga had no origin in Sikhism. Nevertheless many western followers of Kundalini Yoga have become Sikh converts and taken Sikh names. The style is quite different, combining physical movements, breathing practices, and chanting, to awaken the essential energies for spiritual awakening.

Originally developed out of Iyengar Yoga, by one of Iyengar's students, Judith Hanson Lasater (born 8 March 1947), Restorative Yoga takes standard Yoga poses and with the use of props and modifications turns them in to poses that can be reclined into and held for long periods of time. The purpose of Restorative Yoga is not to stretch, nor to tone, but to deeply relax. So the propping is done so that every joint is supported. Restorative Yoga is a aimed at giving a boost to the sympathetic nervous system and to assist vagal tone. 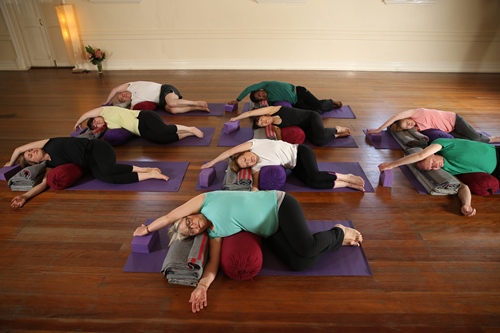 Our yoga classes - where do they fit?

At Yoga Spirit Studios we are breaking the modern postural yoga mould to some extent in that we name our classes without reference to the above popular terms. This gives us freedom to adjust and deliver yoga right for the moment, or series in which various elements may be present.

We call our main class offering "Everyday Yoga" as that best describes what it is. With at least one Everyday yoga class every day of the week, these classes offer postural yoga that varies from flow (vinyasa), to strengthening and toning practices, to deep stretches and relaxation. Each teacher of Everyday Yoga brings their own flavour to their class so it is a great idea to try as many of the as you can. Check out the timetable to see when they are on and who is teaching them.

This lovely 60 minute class is a perfect morning class to get you up and moving.  It's focus is on holding poses for strengthening and stretching. You can take it at 6am in the morning in the privacy of your own home online, and on Sundays you can have a bit of a sleep in and do it slightly later (8.45am) , when you might also choose to come into the studio and do it with a bit of company. Book into a Tone and stretch class here.

Join a 60 minute Prenatal yoga class designed to take the best care of you during your pregnancy, Sunday mornings at 10.15am.

Find out more about Prenatal yoga

This is a delightful class from 4 to 5pm on Mondays, where some of our up and coming yogis and yoginis meet each week. The ages range from 10 to 20, but the group is cohesive, friendly and supportive. It runs during school terms. Check out more here.

This is a unique class which takes movement as an extension of static meditation. Movements are easy and repetitive, and while you will warm the body and stretch a little, the purpose of movement is to practice maintaining mindfulness in states other than sitting meditation, and also for sensing the body as energy, vibration and sensation. Seated or lying "static" meditations are also led. The class has been described as a mini-retreat for the deeply relaxing effect if has. It occurs on Sunday at 10am.

Find out more about our meditation offerings

We use this term to refer to our Somatics classes. We teach somatics in the style of Thomas Hanna. Somatics movements are easy to do, and at first may seem "underwhelming," but their effect is profound. We build somatic awareness, or sensitivity to the body, also known as interoception, and the movements use a principle of pandiculation, the same way the body releases itself in a good full body yawn. The effect is amazing. Stubborn aches and pains are eased away, stiffness dissolves and we're able to restore greater functional movement throughout our life. At the same time, we are also releasing some of the deeply held tensions that store past pain and trauma in our body, so the mind is also set free. The picture below is a class doing a somatic movement called the steeple twist.

Find out more about somatics 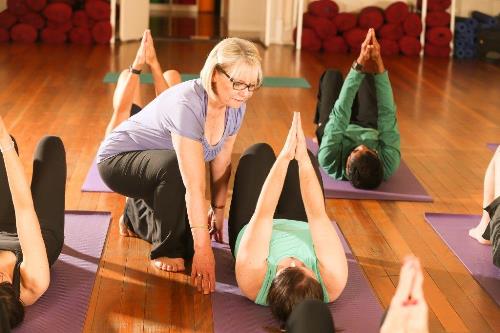 Yoga Nidra is a form of meditation which induces gamma wave brain states while conscious, and allows deep healing to take place. iRest is a modern form of yoga nidra created by psychologist Richard Miller and shown in clinical studies to be effective in sleep disorders, depression, anxiety, PTSD. Anyone will feel the benefits of iRest in improved ability to navigate the ups and downs of life.

We offer a stand alone 60 minute class on Saturday mornings at 9am, and the Thursday evening Pain Free Body & Mind is 90 minutes so it can include an iRest Yoga Nidra.

Find out more about iRest.

As fans of Restorative Yoga we offer periodic classes, The Big Relax and Bolster Bliss. Both are 2 hour classes, the name difference is simply to indicate whether it is a Friday night class (Bolster Bliss) or a Saturday afternoon class (the Big Relax).

Find out more about our Restorative Yoga

Tantra is spiritual practice that is well suited to modern people like ourselves as it originated in householder traditions, not in ascetic traditions like Hatha yoga, nor in monastic traditions. It includes meditations and practices that draw upon immediate everyday life. Tantra is also where most of the energetic practices and maps of the body, such as chakras, come from.

Find out more about Tantra Yoga at Yoga Spirit Studios.

Learn more about our studio here