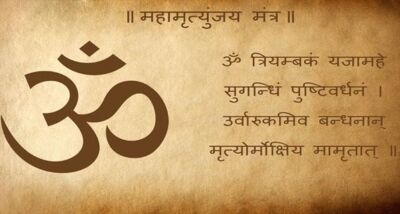 Mahāmṛtyuñjaya literally translates as "the great death defyer". This mantra is said to have powerful healing qualities.

It is very old, first appearing in the Ṛg Veda, which is the oldest extant work of Sanskrit literature. It is a hymn to Rudra, a Ṛg Vedic deity who is later identified with Śiva. While this hymn is from the Vedas, it nevertheless became a very important mantra in the Śaiva Tantra traditions who did not necessarily consider the Vedas as the ultimate authority. But the Tantras certainly recognise a powerful vibrational quality in this mantra.

We worship the Three-eyed one
The fragrant virtuous One who bestows health
Just as the cucumber is released from the stem
May I be freed from death but not from immortality.