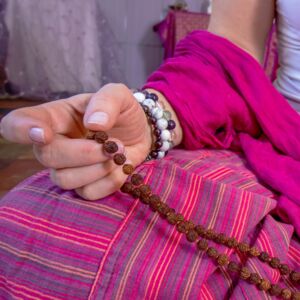 We have just passed the winter solstice, and as has become a custom at the studio at solstices and equinoxes, we held an event to come together and chant the Gayatri Mantra 108 times. This is a traditional practice which is why there are 108 beads on a mala. The fingers are run over the beads to facilitate counting while chanting. There is also a tradition in yoga of doing 108 sun salutations.

The question arose later in conversation, why 108? What is it about 108 that makes it chosen as the number of times to chant a mantra or  do sun salutations?

108 is a number that is ascribed mystical significance in Indian traditions but other traditions as well. Here are some attributions:

But none of this really satisfactorily explains why.

The ancient Indians were keen astronomers (and astrologers) and great mathematicians, so I wondered if all the magical mystical significance comes about due to their understanding of the maths and science of it. And it turns out that there are indeed some pretty amazing things about 108 when we turn to science and mathematics. Like this:

At least it would have been as far as the ancients could observe and calculate it - with modern instruments and computers it is a bit off, but still, I am already going wow!

Now for the mathematics.  I have to admit to quite a lot of  "glazing over" when researching this for I am not noted as a mathematician. But it turns out to be a pretty cool maths idea too. See if you can get your head around these:

I do not know if all of this has resulted in an answer, really, as to why we chant the mantras 108 times and do 108 sun salutes, or why the deities have 108 names, however with such an amazing number, why not?

Next time we chant 108 times please join us. It really is a most blissful experience.

Many thanks to my daughter Chaitanya Shettigara for her mathematical input ... she actually does understand it all and was most helpful in researching this article.