The truth about Tantra 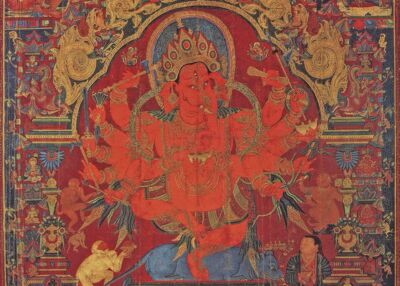 There is something distinctly kinky about how people want to take a very small part of tantric writings and make tantra all about it. I mean sexual practices.

Certainly, Tantra is a fully embodied path to spiritual liberation, and that has to mean inclusive of everything embodied, so yes, sex too! But most of what is currently taught as Tantra in the west is not ... Tantra that is. However worthwhile it is, and I do not want to judge that one way or another, its much touted Tantra label is misinformed and misguiding.

The word tantra is applied to both the tradition and to the scriptural works of the tradition.  And it is not a homogonous tradition. There are various branches with somewhat different points of view, and there are Buddhist, Shaivite and Vaishnavite versions. (Shaivite and Vaishnavite refer to what you may think of as Hindu.) There are versions which are dualistic, that is seeing  a division between a Divine being and creation, and there are versions which are non-dual.  There are versions which take the feminine Divine to be paramount, and others which give primacy to the masculine Divine. The earliest extant tantra scripture is Niśvāsatattvasaṃhitā dates to as early as the 6th century, possibly only a century later than the Yoga Sutras of Patanjali. All dates of ancient Sanskrit texts are rubbery. Non-dual Shaiva tantra has become popularly known as Kashmir Shaivism, but it really was originally pan-Indian, though some of its greatest minds were from Kashmir, and the last known full lineage holder, Swami Lakshmanjoo, was Kashmiri.

Traditional Tantra is a spiritual movement that offered a path to liberation that is more rapid, and available to  householders, that is not restricted to people taking monastic orders or becoming ascetics withdrawn from the world. It utuilises a number of means that include ritual worship and evocation of deities, the use of mantras and mandalas, the mapping of the body into a kind of spiritual physiology (cakras, nadis, kundalini, prana), cultivation of bliss, awareness and identity with divine Consciousness. It regards our embodied state as an opportunity for practice rather than a hindrance.

A positive attitude to the body

Sage Patanjali who recorded the Yoga Sutras somewhere in the early centuries CE is hero-worshipped in the modern yoga world. Yet his attitude to the body is that it is something to be reviled, quite unlike the "your body is a temple"  message you are likely to hear at your local yoga shala. Yoga Sutra chapter 2, number 40 is the one on shaucha, cleanliness. The message there is plain:

By cleanliness, one [develops] distaste for one's body and the cessation of contact with others.

The message of tantra is in stark contrast. The Vijñanabhairavatantra (c850CE) is full of meditative practices that utilise the body as the pathway to liberation, like this one:

Situated on a swing or moving seat [on a vehicle], or through the body slowly being rocked, one's mental-emotional state becomes soothed & still, O Goddess, and one attains the Divinge Flod [of Bliss].

The Vijñanabhairavatantra has 112 such meditations. Three of them do indeed suggest utilising the experience of sexual union and orgasm. Why wouldn't you if you are presenting body centric means for liberation include the sublime experiences of orgasm? But that is three out of 112. We cannot therefore conclude that tantra is all about sex when most of the practices are not about sex.

We can call the practices that come to us from traditional tantra as Tantra Yoga as it seeks liberation (defining yoga as a noun, the goal, the state of liberation or Divine Union).

Tantra suffered a decline in India when the region was taken over by Muslim rulers. The religions of India were horribly suppressed by many of these dynasties. Buddhism retreated north into Tibet, south to Sri Lanka and East to Burma, China and South East Asia. By 1200CE Tantra was in serious decline. To some degree it was absorbed into the Brahminical temple practices, and in pockets it did survive. Fortunately many texts survived and enough lineage holders to give clarity to them before they passed away.

As Tantra was going underground a new yoga movement was arising.  The earliest extant Hatha Yoga text emerged in the eleventh century from a Buddhist milieu. Hatha took some elements of Tantra, but certainly not all of them. There was a return to a masculine emphasis, and to aeseticism. It is in Hatha yoga that postural practices begin to increase in importance, but Hatha Yoga also emphasised disciplined effort (tapas), mudra and bandha. The word Hatha means "forceful", which gives a clue as to the attitude of this yoga, intent on forcing the awakening and arising of kundalini shakti for liberation of the yogi from the endless cycle of rebirth.

Hatha Yoga was pared back from some of the lofty and esoteric practices of Tantra, and it also looks back to the Vedic tradition for credibility. And even though postural practices had a higher profile than earlier forms of yoga, it had only scant resemblance to the postural practices encountered in modern yoga classes.