Sanskrit is to yoga what French is to ballet 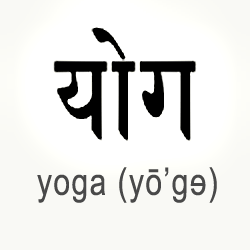 Namaste! Is this a greeting you hear in yoga classes?

Are you wondering why we keep using this incomprehensible foreign language in yoga?

We do try to make sure that you will understand us and use the English names for poses most times, but in time, some of the poses we commonly use the Sanskrit name for, you will get to know.

The thing is, as the title of this post suggests, Sanskrit is the language of yoga.

When you take a ballet class you can expect to plie, pirouette and pas de deux! Nobody really questions it. When you learn western classical music, you will adagio, presto and allegretto. It is all to do with the history and origin of the discipline.

Sanskrit is not originally written in the "Roman" or "Latin" characters that you are reading this English in.

While our way of writing English is useful to etymologists, the people interested in the history and origins of words, as it retains a history of the word's development, it is not a very helpful guide to pronunciation.  And it is also true that English allows for quite varied pronunciation. We tolerate a range of accents that pronounce things very differently and even write songs about it, "you say tomayto and I say tomaato".

Please note that the symbols we use to write a language are not the synonomous with the language itself. This Roman script you are reading this English writing in now is also used to write a number of different European languages.

The picture on this page has the word yoga written in the Devanāgarī script, these days the most commonly used script for writing Sanskrit. It has enough symbols to represent every sound of the language. To use the roman script to represent it we need to introduce additional symbols, called diacritical marks. The system being used on this site is IAST. That is the acronym of International Alphabet of Sanskrit Transliteration.

Please note the following about the diacritical marks you will see, when Sanskrit words are written in IAST.

Namaste – literally “I reverence you”, often interpreted as “The Divine in me bows to the Divine in you”. Note however that this is a singular form. When the Sanskrit namaste passed into Hndi, it became a catch all word meaning hello, and numberno longer mattered, in Sanskrit number does matter. So if you are saying  namaste to a whole bunch of folk at once, say as a teacher to a whole yoga class, and you think you are saying "reverence to you" where you is plural, in Sanskrit, you'd be wrong, although if you are thinking you are saying hello in Hindi, you'd be OK. What the teacher should say to the whole class is namovaḥ (pr. namovaha), which is the plural form.  Each student can say namaste back as they are addressing one teacher.

Añjali Mudrā – holding the hands in prayer position in front of the heart.

Āsana – posture - note the line over the first a. The first syllable is long and long vowels attract the metrical accent. This IS NOT pronounced "us-aaa-na" - it is "aa - sun - a"

After a while, for many of the poses the Sanskrit name will come to mind almost faster than the English. Until then, we do endeavour most of the time to remember to give the English even when the Sanskrit is also given.