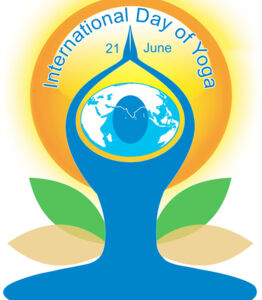 On 11 December 2014 the United Nations General Assembly declared that 21 June would be celebrated annually as International Day of Yoga. (See the official site at http://idayofyoga.org/) Indian Prime Minister Narendra Modi had called for the day when he addressed the General Assembly on 27 September that year, when he said: “Yoga is an invaluable gift of India's ancient tradition. It embodies unity of mind and body; thought and action; restraint and fulfilment; harmony between man and nature; a holistic approach to health and well-being. It is not about exercise but to discover the sense of oneness with yourself, the world and the nature." Modi proposed the date of 21 June as it is the Northern hemisphere Summer Solstice saying "the date is the longest day of the year in the Northern Hemisphere and has special significance in many parts of the world."

Even prior to this declaration countries in the northern hemisphere had been celebrating the summer solstice with yoga, perhaps most famous being the annual yoga in Times Square New York. Such events now could take on an even greater profile as part of a UN recognised day.

Here in Australia of course it is the winter solstice and does not lend itself so well to public open air events. Nevertheless yogis downunder organise events to get into the spirit of things.