So what is Haṭha yoga? 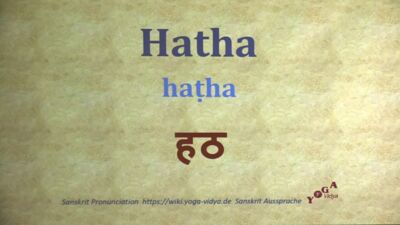 People often ask, what style of yoga do you do? Is it hatha?

Well what is that, I wonder. (Though I really know what they mean, except it is a mystery to me how it came to be!)

This article is about what it was, a little history, and what it has come to mean.

Invariably when that query comes, the word hatha is pronounced incorrectly! I do it myself, because fifty years ago when I first heard the word, it was mispronounced to me, and it keeps getting said that way.

Perhaps we could be kind and say the word has entered into English now and is pronounced with a "th" sound as per the sound in our English word "thing".

In Sanskrit though it is an aspirated palatal, that is to say, you stick your tongue on your palate to say "t" and then blow some air, like a "h" sound at the end of it. Safest to divide it into two down the middle of the t and h, say the first part like "hut, and the second part like "ha" and you will better approximate its correct pronunciation in Sanskrit.

It is perfectly clear when it is written in one of the original scripts, like the Devanagari in the picture. It cannot be pronounced any other way. When we transfer it into romanised script, the script we all use to write English and so many other European languages, the script we are using to write and read this article, we need special symbols to represent all the Sanskrit phonemes to arrive at a similar lack of ambiguity. Such a system is the Internationally Agreed Sanskrit Transliteration, or IAST. In IAST it is written "haṭha" and it is the dot under the "t"that tells us it is the palatal T and the h tells us it is the aspirated version.

So dear yogi, you now at least know how to say the word correctly!

What does it mean?

Not sun and moon, even if you've been told that.

It means forceful. In combination with the word yoga, it is the forceful means to liberation (yoga being about being unified with true nature or the divine).

I know what you are thinking ... how can it mean forceful, isn't hatha the gentle style, as opposed to, say,  Ashtanga, which is vigorous?

Well that is what I am here to tell you about.  Somehow it has developed that meaning, but who knows how! The word means forceful, and that is how it started.

As far as writings go, the earliest text to talk about hatha yoga techniques is a Buddhist text from the 11th century CE. Hmm, yes, not 10,000, not even 5,000 years ago, apologies if some of your closest held beliefs are being challenged here young yogi! Hatha yoga is only, maybe, 1,000 years old.

Having said that, techniques picked up by hatha yoga are traceable to earlier periods, especially to the practices of ascetics, as early as the first millennium CE. The Pali canon reports the Buddha describing mudras, postures and breath retentions that he practised before he formulated his middle path. There are practices that are developed through Tantra Yoga from the eariest centuries CE and onwards, both Buddhist and "Hindu", that are employed in hatha yoga. A rock carved relief sculpture dated to the early 7th century in Tamil Nadu, southern India, depicts an ascetic standing on one leg in the pose we call tree pose. (See the article on Asana). So the practices are not new by the time they begin to be compiled as Hatha Yoga from the 11th century onwards.

What's forceful about it?

The Hatha Yogins really took on the ideas of raising kundalini as the means to liberation, and in some cases, for gaining super powers called siddhas. Tantra had developed the understanding of the energy body, the central channel, and the primordial power (shakti) of kundalini. Tantra included techniques for working with the energy body. But it was gentler. Hatha yoga changed some of concepts from their Tantra origins as well.  In Tantra, for example, there are two kundalinis, and the merge in the heart, but the Hathins describe only one which they aim to raise from the base (perineum) to the crown.

Also, in non-dual Shaiva Tantra, there was/is a strong reverence for the divine feminine, and women had an equal or even higher status in many of its lineages. The yoga practices therefore have a femininity to them.

The hatha yogins turned back to a more masculine attitude, becoming more so as time went by.  They were interested in forcing kundalini, rather than gently inviting her.

So it is that hatha yoga also turned back to the more ascetic and renunciate practices, whereas Tantra had been for householders.

Physical postures would be extreme and the aim is to hold them for extreme periods of time. 10 breaths in warrior pose is nothing! Similarly, breath work involves extremes of retentions. There is a rather extreme  system of body purification, signalling a return to the period of Patanjali's Yoga of regarding the body as unclean, even though hatha yoga is approaching liberation through the vehicle of the body.

However, as time went by, Hatha Yoga became uncoupled from sectarian and religious traditions. Proponents considered that success (liberation) could come only from its practice alone, and religious and philosophical affiliation were useless (a big departure from Tantra, in which View - philosophical understanding - were very important).

So what happened?  When did gentle start?

In the twentieth century hatha yoga changed under a few great influencers, none more so that of Tirumallai Krishnamacharya, who taught from 1924 until his death at the age of 101, in 1989. Krishnamacharya emphasised the physical aspects, conditioning and health benefits of the practice of asana (posture), together with bandha and pranayama, and seems to have completely shifted away from it's spiritual goals of liberation. He taught several super stars who transmitted hatha yoga to the west including:

As a therapeutic practice, it shifted its emphaisis from forcing kundalini to awaken, to gentler practices aimed at health. And following its introduction to the west, yoga has been commodified into a multiplicity of brand names and styles, so it is extremely confusing, and gives rise to that question, what style do you do?

So what is hatha yoga today?

Well I am almost tempted to say genuine haṭha yoga doesn't really exist. That is the haṭha pronounced hut-ha. It has faded into the mists of time.

But there is a physical style of modern postural yoga that is gentle and flexible to accomodate all-comers, with an English name hatha, written hatha and pronounced huth-a! And it is often characterised as "traditional", which is even more curious!