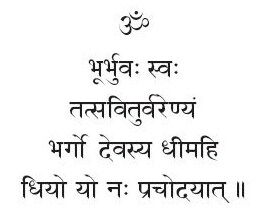 The Gayatri Mantra is from one of the oldest existing texts in an Indo-European language, the Rig Veda, which was composed somewhere between 1700 BCE and 1100 BCE. It is a highly revered mantra associated with the rites of passage ceremonies for Hindus. In the twentieth century the same yogis who were bringing yoga to the west, began to teach the Gayatri mantra more broadly.

Gayatri is a vedic metre in which the verse is composed.

The first line of what we chant as the Gayatri mantra, Om bhur buvah svaha, is not in the Rig Veda mantra but is a later addition.

The Rig Veda is essentially a collection of hymns to Vedic deities and the deity of the Gayatri is Savitr. Savitr is sometimes regarded as Surya, the Sun, and sometimes as separate, but nevertheless shares many of the qualities: brilliance, life-giving, beneficence and protection.

As the Gayatri became popular in modern times we find some broader interpretations. So let's have a look at it. First, all the words together and then a word by word translation.

Om, or Aum, is regarded as the primal sound of the Universe and points to the Oneness of all.

Savitur – Savitri, spiritual sun, the One Light, all pervading Consciousness

Varenyam – worthy of worship, venerable, adorable, worthy of being sought

Devasya – Divine, of the Deity

Prachodayaat – may he energize, direct, inspire, guide, unfold; or, he who energizes, directs, inspires, guides unfolds

Putting all of this together, there are still many translations and interpretations.

Here is a literal translation by Christopher Wallis:

May we focus our Awareness
on the alluring radiance of the rising (or setting) sun
the Vivifier; may it inspire our thoughts and meditations.

One of our favourites is given by Donna Farhi:

Everything on earth, in between and above
Is arising from one effulgent source.
If my thoughts, words and deeds reflected this complete understanding of unity,
I would be the peace I am seeking in this moment.

Or the playful interpretation of Richard Miller:

There is a particular way of chanting the Vedas called vedic chanting and in that system there is a specified way to chant the mantra. You can learn more about vedic chanting in the Wikepedia article here.

But since some of the mantras "got out of the box" so to speak there have been many versions of it, some more traditional, some more tuneful. Here is one: